Home / Breakthrough Visuals on Fox 29
On Tuesday, October 2, I got a call out of the blue by a reporter from Fox 29, the local network affiliate. He told me that the station was running a little contest to find the best suggestion for a mascot for SEPTA, the public transportation authority here in Philadelphia and that he thought it'd be fun to consult an professional visual storyteller. It was 10:00am and he needed the ideas by 4:00, so, always up to appear on TV, I put on my thinking cap. By the time he arrived at my studio that afternoon, I had a few ideas sketched up, and they weren't too bad, if I say so myself. If you're not from around here or are but have been living under a rock, the last design is a takeoff on Gritty , the new mascot for the Philadelphia Flyers hockey team, whose wild popularity inspired the contest to begin with. Here's the segment--I don't appear until the last third, so be patient. 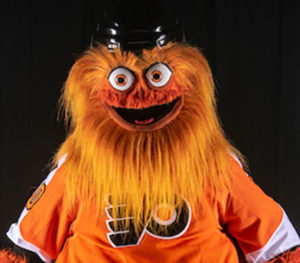